Are you a fan of the Beatles? My connection with the Fab Four goes back to the 1960s, as two of my sisters went to see them in Manchester, so our house was regularly filled with their music. Nowadays it seems that lots of people have rekindled their interest in the Betales, often from a purely collecting perspective, I'm quite sure that most Beatles records are now bought for investment and few are ever place on a turntable.

We always some some Beatles items for sale, so it makes sense to feature them here, along with some great LPs that we have accumulated over the last couple of years. 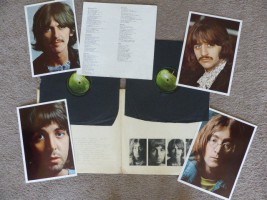 Original 1968 1st pressing, Mono, PMC7067, XEX 709-1 710-1, 711-1,712-1. Top opening laminated gatefold cover by Garrod & Lofthouse with original black sleeves, complete with all 4 photos and lyrics poster.  Embossed "The Beatles" to front cover (all lamination intact) with barely visible (but there) No. Some surface scratches to both Lps but play well with no skips or noticeable surface interruption. A real collectors item these days.

The last one of these (see below) proved so popular that I thought we'd better feature another. Nicely done this one, the film cells being the opening credit to A Hard Day's Night then a single photo of each of the Fab Four below the larger image. Measures 23 X 11 inches 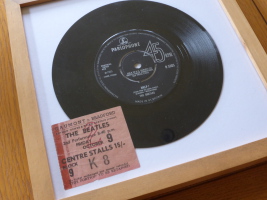 The ticket belongs to one of our clients who actually attended the show and is known to be 100% authentic (there are a lot of fake ones out there!). Presented in a frame with a 1965 first pressing of Help!. 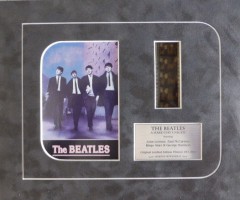 Framed and glazed, measuring 10" X 8", an original strip of 5 film cells from the film, no. 97 of a limited edition of 300. Produced by Legends Memorabilia with certificate of authenticity to the reverse.

See the New Arrivals tab for photos and descriptions of our most recent acquisitions!