Hover over, or click on any photo for a larger image

I know I say this quite a lot on the website, but WOW!

Absolutely fantastic large green jug by Susie Cooper, featuring incised panels of a charging ram and well, to be honest I'm not 100% sure what the other charging beast is! Excellent condition, measuring 20 cms tall, 15cms at widest point. Full inscribed signature of Susie Cooper to base with hand written date of 1932. A real Art Deco statement.

Another fabulous vase from the same home. This one smaller (11cms) but wider and in the same hand painted pattern. Again excellent condition 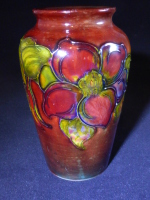 Fabulous 5 inch vase with a deep, graduated flambe glaze in a rich red to brown colourway. Impressed factory mark to base. Minor scratches (as you always get with flambe ware) otherwise perfect! 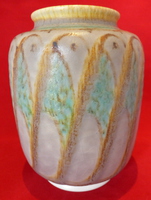 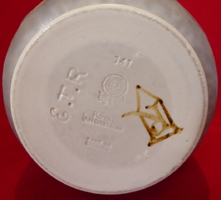 This truly is a stunning piece, standing 7.5 inches tall with a circumference of 18 inches. Condition is outstanding with no chips, cracks or any restoration, just some expected age-related crazing. 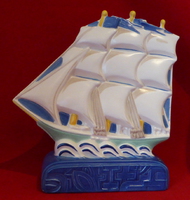 I've always wanted one of these! The original galleon was designed by Harold Stabler in about 1925 and became the iconic emblem of Poole Pottery. Named "The Harry Page", the name derived from that of Henry Paye who is said to have been a local pirate.

If you want one of the originals, it will now set you back £2,000 (if you can find one), or you could save yourself 90% and buy this perfect 1990's versions. Standing at 10 1/2 inches tall and 9 inches in diameter, it's in excellent condition and marked to the base with the Poole Studio backstamp. An Art Deco icon!

We love to bring you the unusual, and it doesn't get much more unusual than this!

The story of the Cubist Polar Bear......

One of the great founders of the Art Deco movement was the French ceramic sculptor Andre Fau.

He received a Diploma of Honour at the Exposition des Arts Decoratifs, the 1925 Paris exhibition that gave us the term “Art Deco” and was considered one of the foremost ceramic artists of his time. Fau was a contemporary and admirer of the cubist painters Pablo Picasso and Georges Braque, incorporating their geometric style in his own work.

Working in Terracotta to build a basic structure, he then painted his finished work and applied a craquelure glaze before firing the piece, this giving the impression of crazing. Fau worked with the Longwy collective in Boulogne sur Seine, producing works under the Longwy mark

Fau incorporated his love of cubist and geometric shapes into much of his early work, which is now highly sought after. A series of cubist sculptures were produced in the late 1920’s, including this remarkable polar bear.

It is signed Longwy to the base and is in exceptional condition. A remarkably rare piece.

Ruth: "Why is there a huge ceramic fish in the lounge?"

I've always wanted one of these! The famous Art Deco fish sculpture by the French Le Jan company, made in the late 1920's. Signed and standing at 12" tall, 16" long, probably by Andre Fau, who was involved in the Le Jan collective. Craquelure glaze. As with the polar bear, he is featured in the same book. Rare and in excellent condition.

This piece has been hand signed on the base by Juan LLadro, one of the 3 founding LLadro brothers.

Signed pieces are rare, but ones signed by Juan Lladro are extremely scarce as he is known to have signed only a very small number for the LLadro Collectors Society at the beginning of the production run. Excellent condition.

My guess is that it's German and dates to the 1920's. Incredibly well modelled and beautifully painted, measures 6.5 inches in length, nearly 5 inches tall. I'm not familiar with the backstamp, but an educated guess takes me to the Silesia region of Germany, but if you know better, please do let me know. Great piece.

Just so Art Deco. In the rarer pale blue hue, 1st quality, excellent condition. Usually sells on Ebay at £200, so grab a bargain!

Now this might come as a surprise, but if I could only collect one make of pottery it would be Poole. I love the decoration whether it's 1930's or 1950's as they are just so evocative of the eras. Very robust and always beautifully painted, every home should have some Poole! 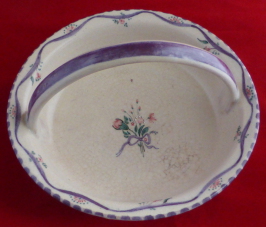 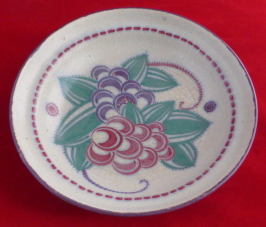 Poole shallow bowl in RE pattern

Poole bowl in RE pattern

Another great bowl by Anne Hatchard from the same period, this time in the very rare RE pattern. 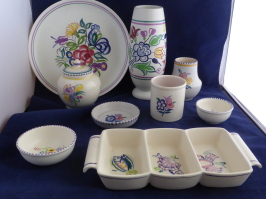 We love Lladro and have many fine pieces ourselves. It all started a few years ago when we were lucky enough to buy one lady's entire collection that she had brought back over many years from her annual holidays to Spain. We prefer the earlier pieces by the finest designers and love these small vases! All First Quality and in excellent condition.

Designed by Lladro master Vicente Martinez, these highly glazed miniature (4 to 4.5 inches) vases were in issue between 1972 and 1986 and now highly sought after. All carry date marks for 1971-74.

Love these! Unusual for Lladro in that they are unglazed. Now hugely collectable and very well decorated. Occasionally turn up uncoloured, these are the rarer versions.

All sculpted by Jose Roig and in issue 1984-1990. All reference numbers quoted are from the Lladro archives. 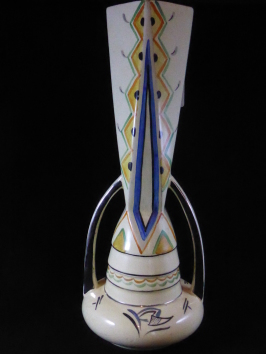 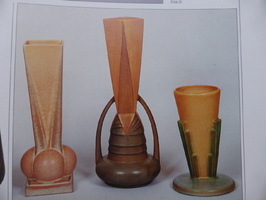 Illustration from The Art Deco Sourcebook

Here's a strange one. Although unmarked to the base, this huge, impressive rocket vase is in the exact shape of a Futura vase by the Roseville pottery Co of Ohio. The range was introduced in 1924 and produced throughout the 1930's. Roseville is now highly collectable. The thing is that Roseville Futura vases are normally glazed in earthy tones, although they are also known in bright pink and blue. I've certainly never seen anything like it!

An identically shaped vase can be found in Patricia Bayer's excellent book "Art Deco Sourcebook, a visual reference to a decorative style 1920-1940" (I've added a photo of the page from the book) 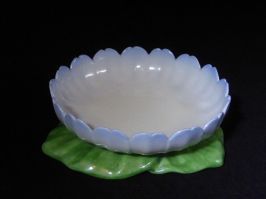 A rare and beautiful Royal Worcester Lily Pad small bowl with date mark for 1937. Pattern no. 3206. 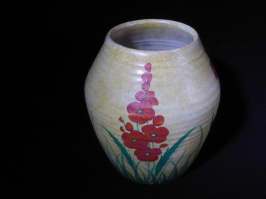 Art Deco ribbed vase with early Burslem backstamp that dates this piece to the 1920's. Handpainted over glaze and in excellent condition. Height just over 6 inches 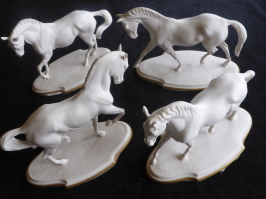 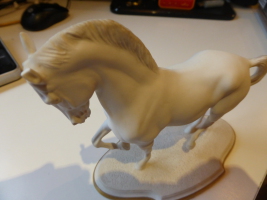 Very rare set of 4 Franklin Mint Dressage figurines. Dating from c1991, these are remarkably well sculpted by Pamela Du Boulay and made in fine bisque porcelain. Featuring the poses "Travers", "Pirouette", "Piaffe" and "Trot Allonge", each horse stands about 5.5 inches high. All in perfect condition. It's extremely rare to find even one in this condition as they are so delicate! I've only ever seen one horse for sale on Ebay; even then it was £85. 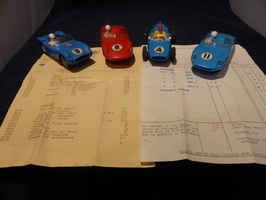 Here's something unique! Meccano developed their Circuit 24 series for the French market as a rival to Scalextric.  Included in the package are 4 original cars (2 X Panhard, 1 X Ferrari and 1 X Cooper), the Cooper being the rarest. In addition there are 2 sections of track, an original very good brochure as well as the original receipt for the cars dated 1966 and a 1966 Meccano Circuit 24 price list. You'll never see another! 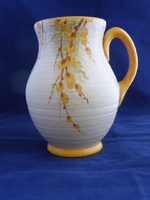 Brown Pussy Willow pattern by Charlotte Rhead for Crown Ducal. From memory (I've put it in one of our cabinets!) it's about 8 inches tall. Excellent condition, as new really, with no losses to the hand painting, no chips, cracks or any restoration. c1935. 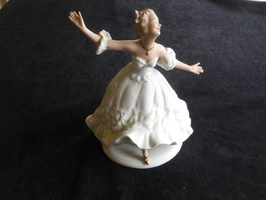 Rare and beautifully made porcelain figurine from Wallendorf (Germany). No. 1497 From the "Ballerina" series, a real Art Deco gem. These early Wallendorf pieces are now very sought after, and I'm not surpised. Excellent condition. 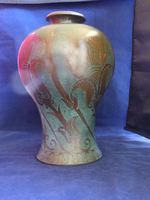 WMF being the Wurttembergische Metallwarenfabrik. Again, one that I've put in one of our cabinets for now, so my guess is c11 inches. Fantastic inverted baluster shape Art Nouveau copper vase with sage green and pale brown foliate design.  Full WMF markings to base, c1910. Not absolutely perfect, so a fraction of what it should be! (Ignore the red on the left of the photo, that's just a reflection). 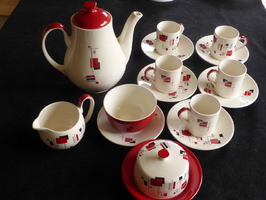 Pioneered by Charles Noke (Art Director at Royal Doulton from 1914 to 1936) and Fred Moore, the Flambes were based on the ancient Chinese flambe wares and were incredibly difficult to manufacture. Several firing processes were used to obtain the amazing variations in the glazes, meaning that no 2 pieces are the same.

Very popular in Australia and USA, the high-fired pieces are the most sought after and therefore hardest to find. (And the most expensive!)

Very rare! The only one I've ever seen. Fantastic tea caddy, just 2.5 inches high. Dated 1923 and in excellent condition. Treasured for many years by a fanatical private collector. 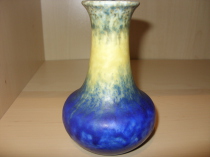 Standing at 10" tall and in excellent condition, this stunning vase dates to the late 1950's and has a pattern of delicately incorporated fish designs within its pattern.

Now collected in its own right and a favourite amongst Royal Copenhagen collectors. 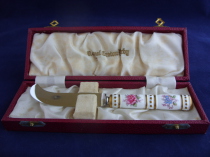 Rare early Imari pattern, c1920. Whilst these crop up from time to time, they very rarely have their original box with them.

Now really sought after and iconic of the 1950's, good original Zebrette rarely comes to the market.