From rare one off items to large collections put together over many years, we have a real passion for ephemera and are always on the lookout for the next great find.

Please click on any photo for a larger image & description

It is believed that there are only 2 copies of this map that are known to have survived, the other being in the London Transport Museum (this being in much better condition), making this one of the rarest Underground maps available.

An extensive collection of ephemera relating to Zoos, the vast majority from the 1960s. Collected over many years and comprising many catalogues from zoos all over the UK. Condition varies from good to excellent and includes some rare pieces from now defunct zoological gardens and parks. The example shown above is the Belle Vue Manchester Zoo Park brochure from 1964.

Presented in four large ledgers, the advertising archives of this Stourbridge based garden machinery manufacturer. Fascinating reading, it details every advert placed by the company from the years 1928 through to the 1970s. Details include every publication they advertised in, the number of copies ordered and the amount paid. Many hundreds of adverts, letters and newspaper / magazine cuttings. 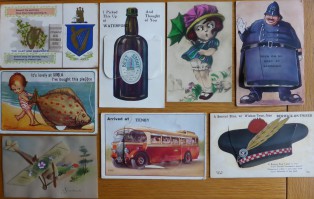 From a private collection, a lovely selection of around 50 or more, dating from 1918 onwards through to the 1960s, with lots of variety including pull outs, googly eyes, panel cards, jigsaw cards etc etc, a really nice collection from the same home as the exhibition and war cards featured below.

Several examples from 1898 with many rare makers that include Taddy's, Cope's, May Blossom, Singleton & Cole, Loadstone, Franklyn Davey etc etc. Includes many examples of the rare Spurs Footballers 1911 series by Jones Bros. Tottenham. All housed in 2 albums with a very high catalogue value. Condition is poor to very good. Just a few examples shown to whet your appetite! 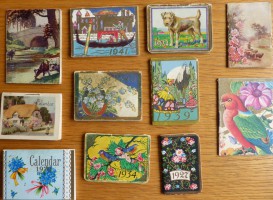 An excellent collection of miniature purse calendars, dating from 1924, through the 1930s and 40s to the mid 1970s. One lady's private collection, these very rarely appear and it's the only one we've evr seen! All in excellent condition.

An excellent collection of postcards covering many of the World's Fairs and great exhibitions from the early part of the 20th Century through to The Festival of Britain in 1951. Many rarities and some excellent exhibition postmarks 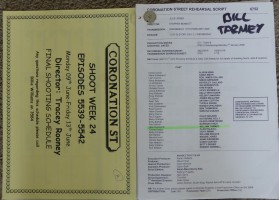 Journal of the Air Forces

This is the only one of these that we have ever seen; nicely bound in a period binder, 13 mint copies of the Journal of the Air Forces, India Command Edition (numbers 1-13) all dated 1943. These were issued for official use only and contained information not normally released to the press.

To add extra interest, there are various annotations to the magazines where they have been read by the senior officers. Each one runs to just over 30 pages.

I must admit that this is the only collection of bookmarks that we've ever seen, and pretty impressive it is too. Around 130 in an album with examples from c1900 to the 1950's. Numerous themes (cats, dogs, birthdays, Christmas etc) with the vast majority being from the 1920's and 1930's. Overall condition is very good, some with calendars attached. Please see photos above for some examples.

We've had quite a few collections of vintage greetings cards and they always prove very popular. This collection numbers well over 100 with the earliest examples being from the 1880's, the latest ones 1950's. Again the vast majority of cards date to the 1920's and 1930's with some stunning Art Deco designs.

A large and very impressive collection of ephemera relating to the golden age of ocean liners, including The Queen Mary and Queen Elizabeth. Starting in 1910 and working through to 1971, the bulk of the collection being in the 1930's and 1950's. Numerous menus, brochures, programmes of events, guides, onboard shopping brochures, postcards, luggage labels etc etc. including some very rare items, around 200 in all, and very well presented (by me!).

All items were collected by one person over several decades. We love this collection, and judging by the popularity of Liner ephemera that we have had previously, we don't expect this to hang around for very long. The photos above are of just a few of the early highlights.

THE COMPLETE COLLECTION IS NOW SOLD 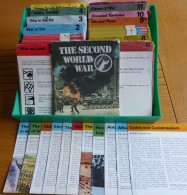 Now really collectable, we have a total of 937 cards, the original collector's tray, all dividers, all leaflets and booklets. Each card containing information on a particular aspect of the war, these are from the original 1977 printing and would cost a small fortune to put together via Ebay. Very good used condition, certainly not seen in this quantity.

From c1920, these are something a bit special. Children's books of transfers, issued by Raphael Tuck.

Extremely rare, these came to light when an old shop was being demolished and were hidden away in a locked room that had not been opened for decades. All in pristine condition, we just had to have the whole lot, which number in excess of 300!

Large, medium and small format, from the Busy Bees, Happy Hours and Little People series. They are now highly sought after and we will consider serious offers for the whole collection.

Dick Cheney; In My Life, A Personal and Political Memoir SIGNED BY DICK CHENEY

This remarkable boxed set of the complete works of Shakespeare was published by William Collins, Sons & Co Ltd in about 1910. The six volumes are in excellent condition and housed in their original box. Bound in rich burgundy leather, each book measures approx 4.75 by 3 inches.

There are other ones out there, retailing at up to £400, but none in this condition.

A Dictionary of Arts & Sciences by G Gregory DD dated 1807.

Huge, heavy and historical, this really is a fascinating book with numerous periuod illustrations throughout. As you mighty expect, it is a bit tatty here and there, but complete and with its original bindings. Rare! 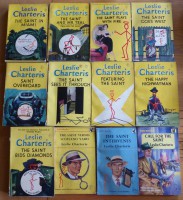 A collection of 12 paperbacks by Leslie Charteris, mostly Hodder & Stoughton Yellow Jacket, all 1950 - 1954, except Call For The Saint which is 1958. Condition generally good and complete.

An extreme rarity, this flyer was issued prior to the first issue of the Beano in 1938. Measuring 42.5 X 29.5 cms and in excellent condition, bright colours with no tearing. Highly sought after and a rare opportunity for the comic collector; these flyers rarely come to the market. 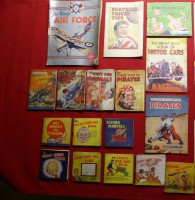 A selection of small books that were issued with comic books in the 1930's. Predominantly from The Skipper comic and all in excellent condition. Many of them are now really hard to find and very collectable.

A selection of books and ephemera relating to coal mining, including;

6. The Colliery Official's Handbook to the Mines & Quarries Act 1954 (98 pages plus appendices)

8. Report of the tribunal appointed to inquire into the disaster at Aberfan 1966 (151 pages) 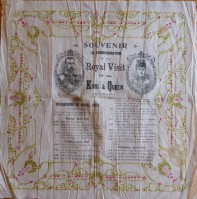 Anyone else have a 104 year old tissue? Didn't think so. An incredibly rare survivor, this 15 X 15 inch souvenir details the King & Queen's visit to Crewe and the factories of Minton, Bernard Moore, Copeland, Ridgway, Fielding, Colclough, Wedgwood, Doulton and Meakin. Printed on very delicate crepe tissue paper, it retains its original colours and is without any tearing. some slight discolouration in a couple of areas.

Value? Haven't got a clue!

"...with part of Scotland, comprehending the whole of the turnpike and principal cross roads, the route of mail coaches, rivers and navigable canals, with the distance from one market town to another, also the general distance from London to every principal town".

This map is a remarkable survivor and extremely rare. For sale on behalf of one of our clients, it is presented in its original heavy board folder, sized to fit in a greatcoat pocket, being c8 X 7 inches. The map comprises 36 panels, each laid on to a heavy linen backing and folds out to an impressive 46 X 38 inches. Overall condition is very, very good; colours are strong with just some minor wear and tear.

If, as I do, you like a wee dram, here's exactly what you need. A comprehensive collection of books on whisky, along with many items of whisky-related epehmera. If you weren't an expert on the subject before, you soon will be! We have to sell them all, so contact us for the best prices.

Wonderful album of over 100 sepia toned and black & white real photographic postcards of Egypt collected in the late 1930's, showing many of the important archeological sites. A few later cards from the Cairo museum 1962 collection.

Extremely rare fold out map entitled "London Underground Electric Railways - How to travel in  and round London". Produced in 1908-1910, the map shows the site of the 1908 Franco-British Exhibition. In excellent condition with no tears, just a couple of small folding holes. Measures 370mm X 283mm

Pocket sized map of the "Underground Railways of London, designed by FH Stingemore and dated January 1927. This is the 4th edition of this card map and lists places of interest and London theatres. 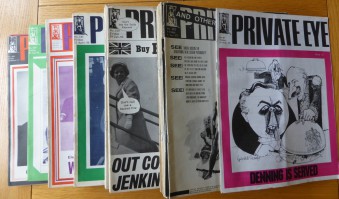 The Archives of Croydon Aerodrome

Very impressive archives of Croydon Aerodrome, comprising 12 folders and albums. Early photographs, postcards, documents, letters etc all relating to the Aerodrome and hotel, dating from the 1920s onwards. An amazing insight into the early days of commercial flight.

Extremely rare. Issued by Thos Agnew as a catalogue for Lalique's exhibition of jewellery at Agnew's Bond Street premises. 39 pages in French and English, with sections describing the contents of the various display cabinets. Only 2 other copies are recorded; one in the Rare Books section of the Corning Glass Museum, New York, the other at Tate Library, Tate Britain. Measures 20 X 10 cms. Condition good to very good.

A must for the serious Lalique collector!

Fascinating Candian Pacific folder containing all 133 handouts from The Empress of Britain World cruise that took place between December 1931 and April 1932. This was the 9th and last of Candian Pacific's World Cruise voyages. All printed on card with many period features and insights into the places visited on the trip. Excellent condition.

International Watch Company parts catalogue dating from c1952. A complete catalogue of all movement parts, numbered and as issued to IWC watch retailers. In excellent condition within its original binder. Accompanied by a letter from IWC to a Bolton jeweller dated Dec 1965 enclosing additional pages. Impossible to find in this condition!

(all with dedicactions on the inner board)

1. The Case-Book of Sherlock Holmes

2. The Memoirs of Sherlock Holmes

3. The Adventures of Sherlock Holmes

The Saint by Leslie Charteris

(all with dedicactions on the inner board)

1. The Saint in New York

3. The Saint Steps In

4. Call For the Saint